All the world’s a stage

John Lawrence Sullivan’s carefully tailored, sharp, and elegant clothing has been highly praised for its high quality and originality since its debut in 2002. The designer Arashi Yanagawa has an unusual history as a former professional boxer, and caused quite a controversy in the industry when he first debuted 15 years ago. Despite this, his brand, which draws its name from a legendary boxer, has now been featured at Tokyo Fashion Week, presented 7 shows in Paris, and in June of this year, showed at London Fashion Week for the first time.

Yanagawa is extraordinarily picky about materials and almost all his fabrics are original. Of course, the patterns, weaves, and sometimes even the yarns are also unique. His designs require advanced techniques to apply elaborate effects or adjust patterns by the millimeter to fit the fabric, so production is basically all done in Japan. It is impressive to see Yanagawa pressing endlessly forward in such minute detail, trying to create garments as close to perfection as possible, whilst most other brands use existing fabrics for efficiency. It is truly for an independent designer to pour this much energy into materials and garment construction.

Yanagawa says that when his brand was first launched, he began visiting Bishu, one of Japan’s few wool producing areas.

“If it weren’t for Bishu, our brand wouldn’t exist.”

He finds that he discovers new things by visiting as many factories as he can and talking to the workers. He says the workers sometimes give him ideas, like, “There used to be this kind of fabric, but it doesn’t exist anymore,” or “What do you think of this texture?”

“I sometimes have shirt fabric (cotton) made in wool factories. When you make shirt fabric with a wool loom, you get wide, neat, and beautiful fabric.” The clothes Yanagawa makes are not simply beautiful. There is something extreme about his designs, a sort of avant-garde attack on the senses. But the extremity must be backed by traditional, careful cloth-making and advanced techniques, enabling Yanagawa to create such elegant, mature pieces. 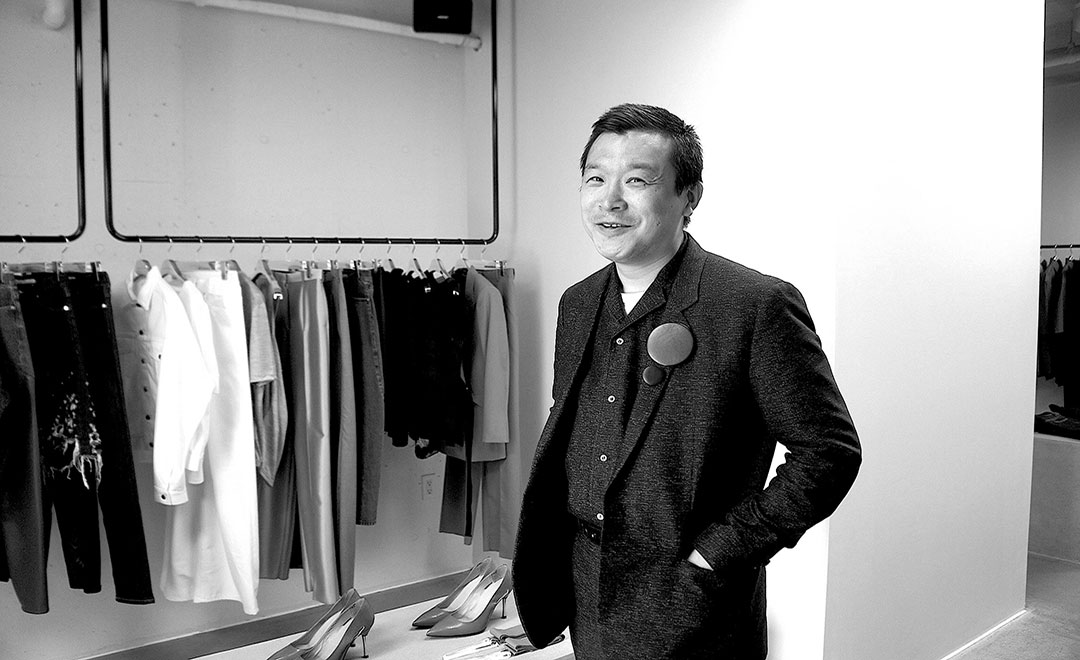 For his autumn/winter 2017 collection, the designer was inspired by German architecture, music, and art. The colours are reminiscent of the red, yellow and black from the German flag, and the silhouettes and details have a sort of German architectural feel to them. The double-breasted jacket, the brown jacket with lacing arms, and the hakama style pants all evoke a strong beauty, as if boldly throwing down the gauntlet. “I have always liked German things. The furniture and stationery I naturally choose are all German. I’ve also been to Berlin and Munich a lot, and I like how those cities are balanced with nature. A long time ago I once chose Bauhaus as a theme for a show. I think the feeling of tailored structure is similar to the atmosphere of Germany.”

The collection presents strengths like cold urbanity and sharp modernism. Its materials are also appealing. The Melton duffle coat was made using something called Haruto processing that brings elasticity to the fabric normally prone to looking coarse. The water buffalo toggles on the coat are huge, with the horn left in its natural shape. The Glen plaid suit used in the first look of the show was made using Cheviot wool cloth. Since Cheviot sheep live often in the hills, their wool is strong and resilient and used mostly for tweeds, but Yanagawa combed it to make an original thread for suit fabric. “Fabric is a living thing. It changes depending on the climate of the country, and humidity changes it too. It’s interesting, and it’s worth it to be choosy.”

“I want to create things that feel special; things that are somehow unique so the people who wear them can feel different. I aim to make clothing that imparts feelings of excitement and joy. I want it to be beautiful and cool in an edgy way, and I intend to dedicate my life to this challenge.” 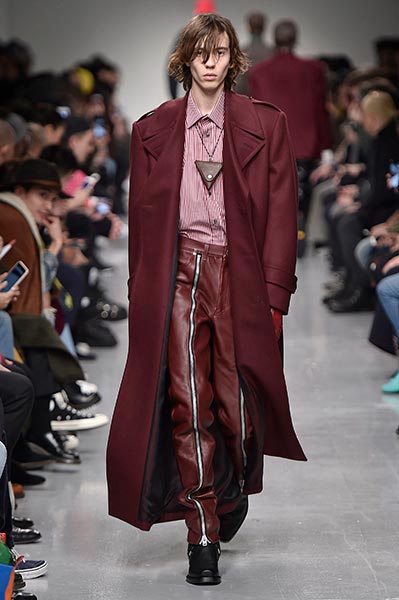 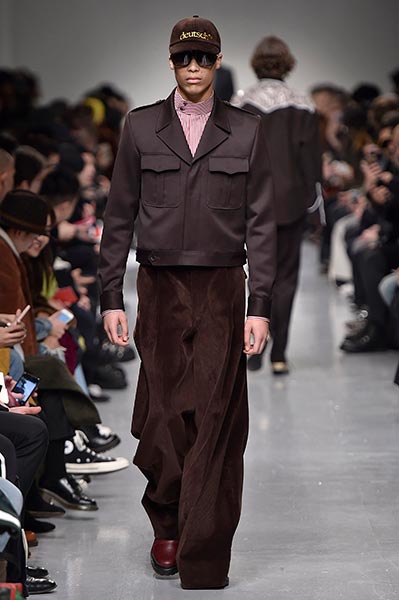 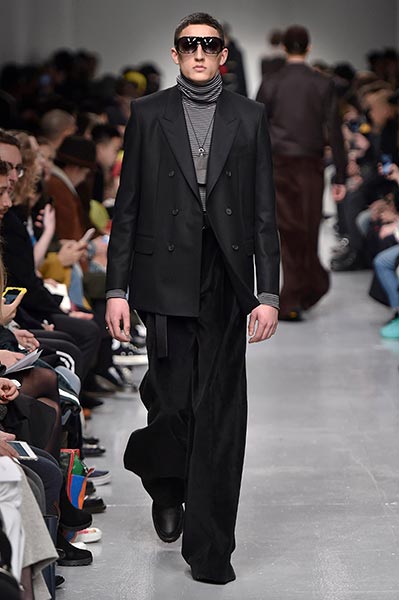 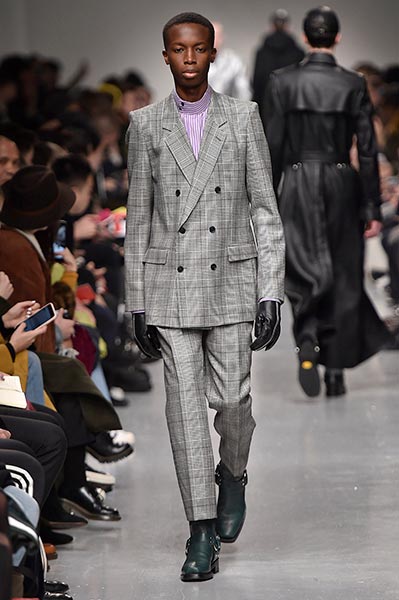 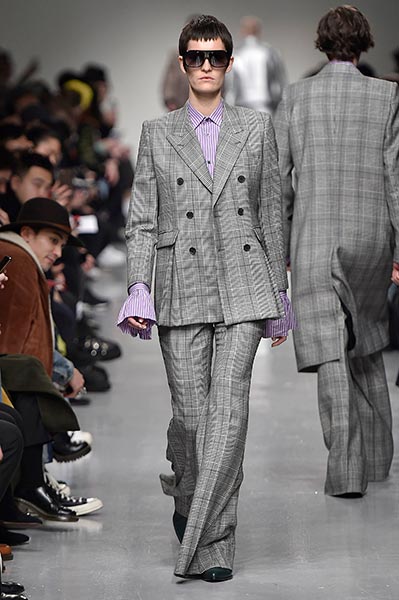 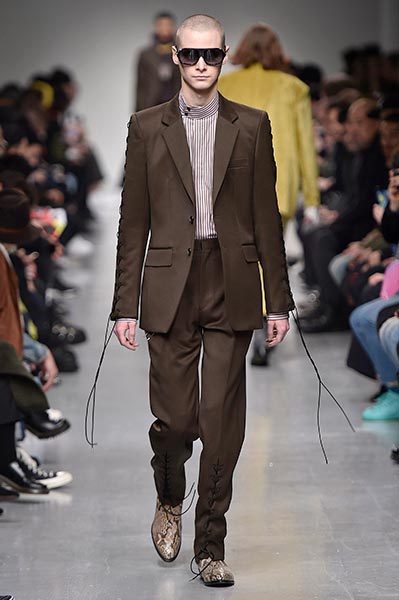 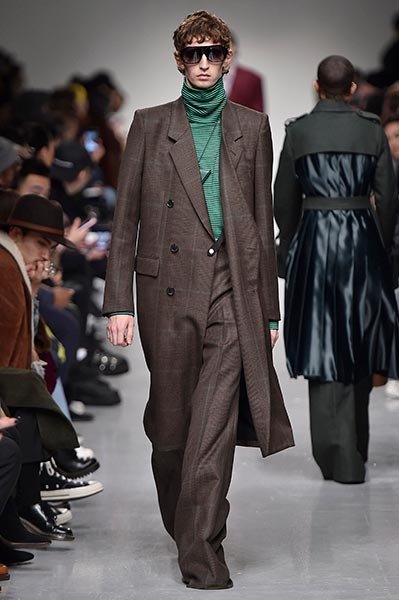 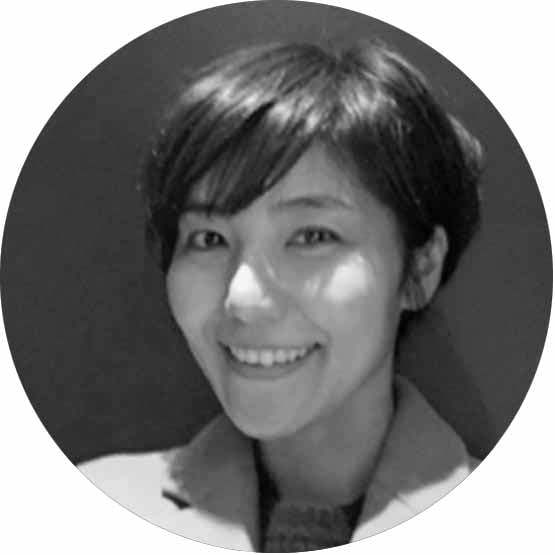